The faith of the people in the state and government institutions

Last night, the Sarissa Institute organized the second part of the Conservative Caravan entitled “Policies and values ​​of the conservative system: The people as a key pillar of the state” at the Civic Society Resource Center in Gostivar. The guests spoke about the political philosophy and ideology in the Macedonian society, religion and traditions, as well as the plans and programs of the Institute.

Sasho Markovski, who is also the Executive Director of the Sarissa Institute, sends that the Institute promotes a culture that emphasizes values, justice and farness. The conservatives are not radical extremists, but they endorse individual rights, civic values and safe state. Restoring faith in the state and government institutions is one of the main goals of the conservatives, and good governance and democracy insuperable. A good state institution is one that is transparent and effective in serving the citizens. Only if we work to improve the transparency and the integrity of government, we improve the trust of the people in the government institutions. Our country needs to be strong and developed in order to enter the strongest and most prosperous unions. If conservatives believe in family values, then we need to make sure our families breathe clean air and drink clean water, to have a developed economy for our children to enjoy a comfortable life, to have a strong and safe country where we will feel safe and free.

Damjan Petreski, who is a student at the Orthodox Theological Faculty “St. Clement of Ohrid”, talked about religion as a protector of traditional values. He emphasized that if we look at the Ten Commandments, we will see that the first four are of religious character. The remaining six  are available to and could be practiced regardless of faith or religion. Today, the whole world is experiencing a tremendous challenge called COVID-19, which attacks both believes and atheists. We are witness to large numbers of infected and dead people; people, not numbers. There are false believers, who appear among the people are deceiving them that wearing masks is act against God. But if we protect ourselves then we are protecting our loved ones, pleasing God. The Church preserves tradition, but that does not mean that the Church is against progress.

Its purpose is not to hinder progress, but to hinder movement back to a primitive state. Although there are many testimonies of when the religious nobility focuses on their own material benefit  and is the cause of the downfall of a society and the moral decline, religion in general and Christianity in the Balkans has always been the cornerstone that holds our society.

Aleksandar Bogatinov, a professor of ethics, logic and philosophy, turned to the notion of what it means to be recognized as a value in everyday meaning? To be recognized means to be valued, respected, for others to accept the opinion you have about yourself. Our failure to achieve this is reflected in the fact that we have not been recognized for 30 years. The average Macedonian shifts the blame to the neighbors or other countries immediately to explanation this non-recognition. Do we need to look at ourselves? Which mistake we repeat these 30 years, which we do not want to admit? The words independence and sovereignty do not only refer to freedom to behaving as we would like to live and be. Independence and sovereignty are words that in their meaning hide an obligation, a duty. Independence and sovereignty in us creates an obligation for us, as a free state, to be able to carry ourselves. Sovereignty does not only mean that we are now independent and have to make our own decisions about our future. We have that sovereignty to show that we know how to deal with ourselves, to develop as a state, to prove that in our decision-making we really know how to build a country on solid foundations and pave the way for future generations. Only then we will be truly independent and recognized in the light of contemporary foreign policy developments. We have not proved this to the Europeans for the last 30 years, and thus we have not passed the recognition exam. We did not prove to them that we can create a healthy society with good governance, and thus show that we are truly independent. On one hand, politics is understood as a public activity where the goal is the realization of one’s personal, selfish interests, gaining a position in society, influence, power and material wealth; a typical barbaric conception of politics. On the other hand, is a reasonable understanding of politics, which is recognized as healthy governance for the benefit of the state and its development. Politics is a public sphere of action where the individual sacrifices his or her personal interests and privacy in order to do some social good, puts him/herself in the service of improving and developing the lives of the citizens. 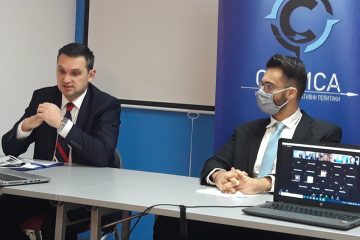 Conservatism – Amalgamate for the new and the old

On Thursday, 19.11.2020, in the Civil Society Resource Center in Shtip the Sarissa Institute held a debate titled: The policy and values ​​of conservatism, Conservatism – Amalgamate for the new and the old. This was Read more… 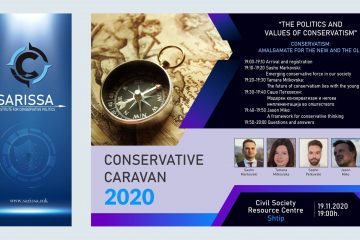 Conservative Caravan: “The Politics and Values ​​of Conservatism”

On Thursday, 19.11.2020 at 19:00 at the Civic Resource Center in Shtip the Sarissa Institute will hold an event “Politics and values ​​of conservatism”, Conservatism – Amalgam for the new and the old. This event Read more… 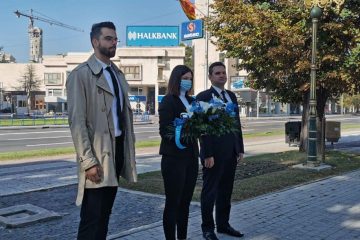 A delegation from the Institute for conservative politics SARISSA, led by the director Sasho Markovski, today laid fresh flowers on the monument of the founders of the Macedonian Revolutionary Movement, on the occasion of the Read more…